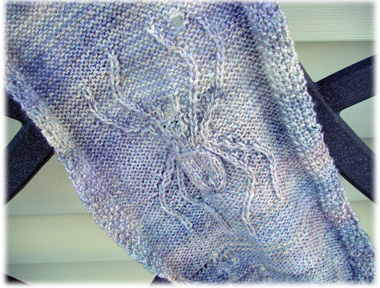 Here's a close-up of a scarf I knitted.
The pattern is called October is for Spinners and can be found on Ravelry.
I made several changes to the pattern.
I used 2 strands of of Prism Lace Wool instead of 4.
I wanted the scarf narrower and lighter.
The colorway is called fog.
I also started with smaller needles than called for in the pattern
and worked my way up to larger needles
and 1 strand of yarn.
I repeated parts of the pattern many times
to get the scarf long enough.
I also added tiny seed beads for the eyes.
I don't know whether to wear it or hang it on the wall.